The government of Canada tries its best to reunite the families of migrants together. It offers a Dependent Visa under the Family Class Scheme which allows Canadian citizens and Permanent residents to sponsor their dependent spouses, children or parents to join them in the country.

The Canada Child Visa comes under the Dependent visa category. 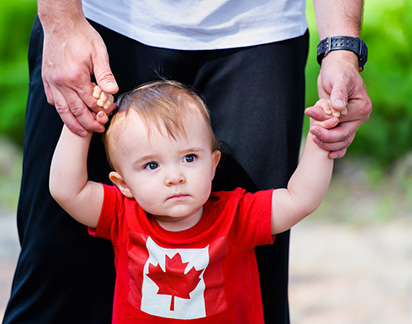 Eligibility conditions to sponsor a dependent

If an individual wants to sponsor a Dependent Visa for Canada, he must submit documents that provide information about his finances for the past 12 months to the Immigration, Refugees and Citizenship Canada (IRCC). This will help the authorities to determine if the sponsor has the means to financially support the members which includes his dependent children.

Conditions that make the applicant ineligible to sponsor a child:

If the parent does not intend to live with the sponsored child in the country after they become a permanent resident.

If the parent is a permanent resident and is living outside Canada. However Canadian citizens can file for the sponsorship application from outside the country.

If the parent is a recipient of social assistance for reasons other than having a disability.

If the parent is in jail for a criminal offence.

The dependent visa allows sponsors to bring to Canada:

Steps to apply for a Child Visa

The applicant must first prove that he meets the eligibility criteria for sponsoring a child. The next step is to prove the child is eligible to be sponsored.

After this, the application can be submitted to the IRCC. The IRCC has country-specific requirements for sponsorship. The applicant must adhere to them for a successful outcome

Using the Express Entry system to bring your child to Canada

Individuals can include their spouse and children’s profiles in their Express Entry and other aligned immigration programs when making an application for permanent residence.

If they succeed in getting the PR visa, then there is no need to apply for a dependent visa later.

Y-Axis Can Help You With
Y-Axis Process
Testimonials

I have interacted with Mr. Adarsh and Mr. Krishnamurthy from Axis for processing the details. The way Mr. Adarsh helped to close on the sales and meticulously understanding all details of my needs was simply amazing. Mr. Krishnamurthy helpled me to execute the application. He is very knowledgeable and does not hesitate to double check on things just because you want some specific input. What I like the most is the personal care these individuals provide. I was very specific in getting response to me on the promised timings. I am really thankful that both of them provided amazing support throughout. I highly recommend this service to anyone who is serious about migration.

I highly recommend Y-Axis Immigration. They are very responsive and will treat you like a VIP. Special thanks to Mr. Saumik Kumar Mittra and Mr. Hami Nimourand who have been very helpful so far. Kudos to all you guys and hope that you will help more people realize their dreams in the future.

It has been a great help working with y-axis. And I would highly recommend anyone to use their services as their agents are very helpful and supportive throughout any process you may come across

Our Accreditations
Contact Us
Impact
Company
Press and News