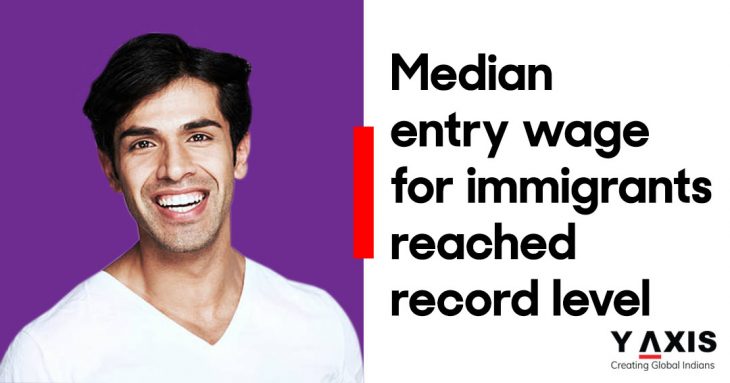 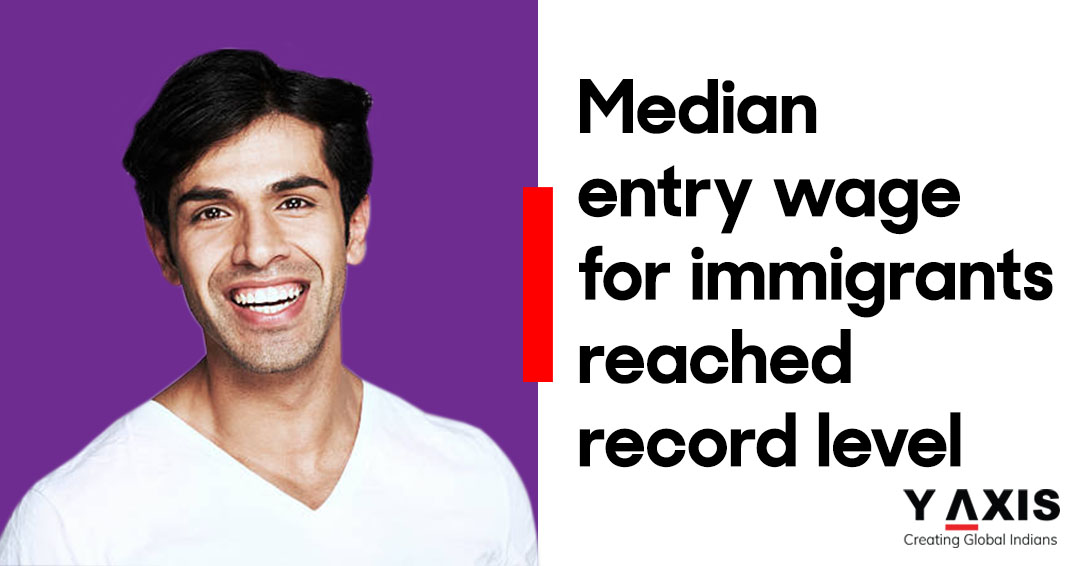 An interesting finding has come up about the earnings of immigrants in pre-COVID times in Canada. The report from Statistics Canada that was released on February 1, 2021, says that the median wage paid to new immigrants who came to work in Canada was at an all-time high in 2018.

Nevertheless, the median entry wages for Canadians stood higher at $37,400. Those who arrived in Canada with a Canada study visa and work visa earned the highest median wages. It came to $44,000. Those who held only Canada work visa had a median wage of $39,100 at its highest point.

Among the socio-economic factors that determined the high wages earned by immigrants included work experience before Canada immigration, proficiency in English/French language, and immigration category.

The fact that many immigrants earned higher entry wages stems from the reason that they had completed their study in Canada or had enough work experience before they came to Canada. Refugees who turned into immigrants also had similar advantages.

These immigrants could settle easier and better into the Canadian environment and were paid for being the better choice in more ways than one for Canadian employers.

High entry wages were also determined by the country the immigrants came from. Economic immigrants from the UK, the USA, and Brazil earned the highest median wages even a decade after their arrival in Canada. 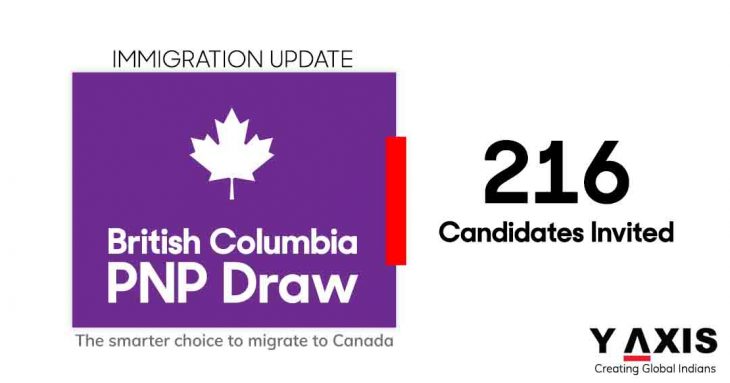 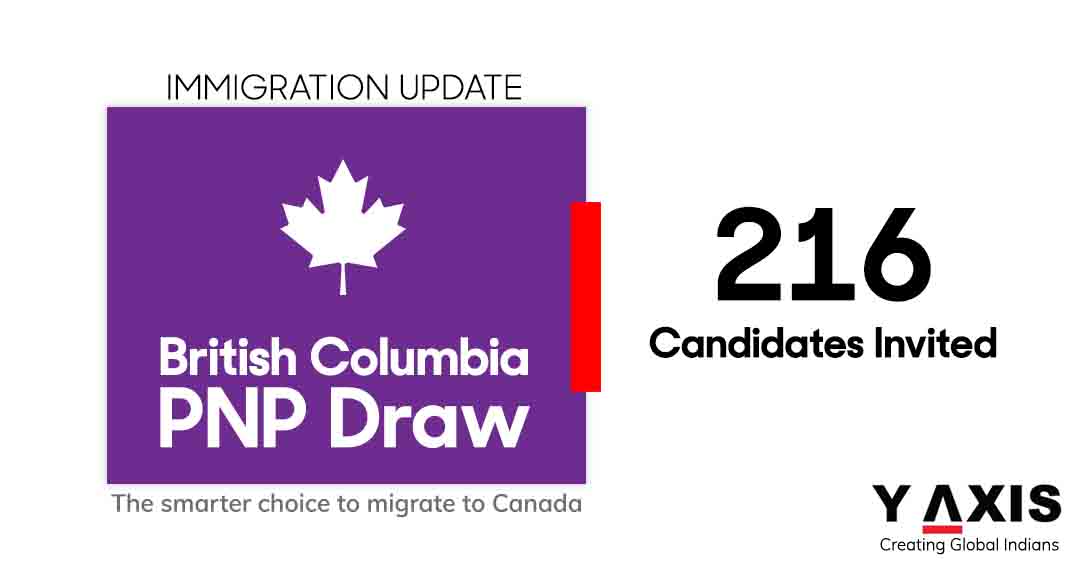 On February 2, 2021, British Columbia conducted a PNP draw. It invited 216 new immigration candidates from different categories. International graduates and skilled workers were invited through the categories of Skills Immigration and EEBC.

208 skilled workers and 8 entrepreneurs were invited through the PNP draw. The cut-off scores for subcategories of EEBC category were:

The invited candidates must have had their profiles submitted with IRCC’s Express Entry system. These candidates who received nominations from BC will get 600 extra CRS points that will guarantee them to receive ITAs for Canada PR in an upcoming Express Entry immigration draw.

The cut-off scores for the 3 Skills Immigration subcategories were as follows:

Several occupations have been excluded in recent times from the scope of BC’s weekly PNP draws due to the impact of the COVID-19 pandemic. These include several sales and service jobs.

In 2021, 740 invitations have been issued by the British Columbia PNP.

For a candidate to apply for categories of EEBC or Skills Immigration, he/she must start by creating a profile via the online portal of BC PNP. The candidate must thus get registered under SIRS.

The factors that are considered to give the candidates scores include work experience, education level, job location, and proficiency in English.

For eligible foreign workers who already have an offer to a job in BC, Skills Immigration is a pathway to get Canada PR. Under the SI stream, there are 5 categories namely:

Except for Entry Level & Semi-Skilled worker, the other 4 categories are aligned with Express Entry.

BC invited candidates to its Entrepreneur stream, issuing 8 invites stipulating a cut-off score of 122. This stream will invite established entrepreneurs to start a business or buy a business in BC and run it. The assessment of candidates under this stream takes into consideration factors like the business plan, education, net worth, business experience, and the amount they are planning to invest.

Alberta welcomes 100 new candidates for CRS as less as 360 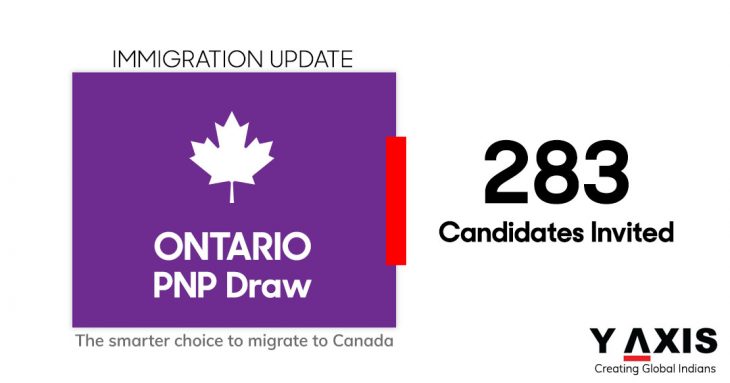 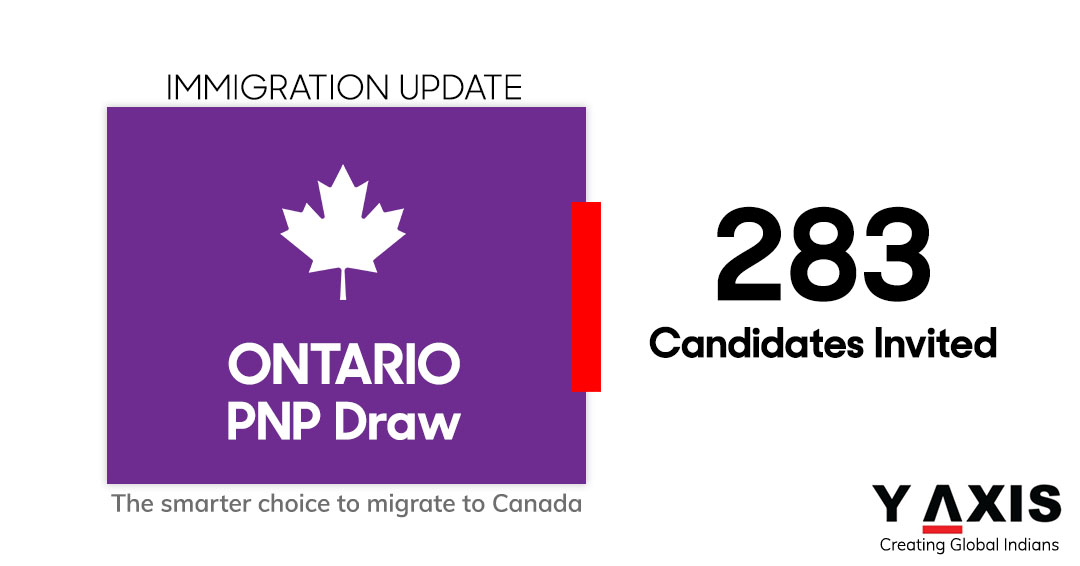 On February 2, 2021, Ontario invited 283 new immigration candidates from the Express Entry pool to apply for a provincial nomination.

The CRS score requirement for these candidates was in the range of 466 to 467. OINP invited candidates who were possibly eligible for the Express Entry HCP stream. The HCP PNP offers skilled foreign workers the chance to get a Canada PR as they settle in Ontario. The skills that these immigrants bring along with them will meet the labor market needs of Ontario.

The following are the occupations in which the invited candidates required to have at least a year’s experience with proof in:

As these candidates are getting nominated by Ontario, their profiles in the Express Entry system will get 600 extra CRS points. This will guarantee that they will get an ITA in a subsequent Express Entry draw.

Alberta welcomes 100 new candidates for CRS as less as 360 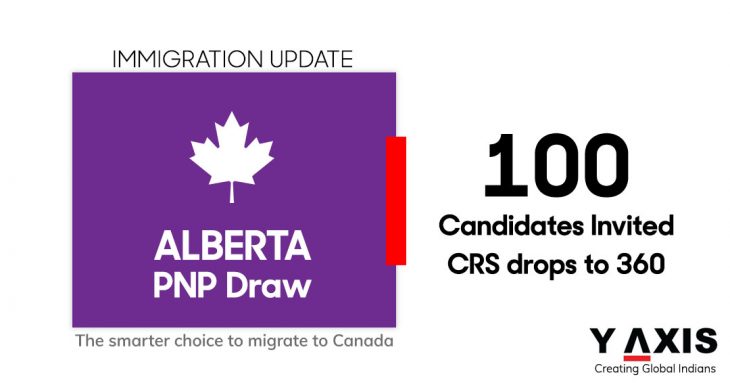 The chosen candidates had their immigration profiles in the Express Entry system that manages applications of potential immigrants trying to move to Canada under economic streams including FSTP, FSWP, and CEC.

These applicants put up their profiles with IRCC and get ranked by CRS. The CRS scores are based on factors like education, work experience, age, and language skills in English or French. If the candidate gets a nomination from a Canadian province, for being a great talent to work in Canada to meet the needs of the province’s labor market, his/her CRS scores will get an additional 600 points. That’s enough to ensure he/she will get an ITA in the next federal Express Entry draw.

Like this PNP draw, there are draws happening all around the year at regular intervals at the provincial level that aligns itself with the Express Entry system. The chosen candidates will have experience in a relevant occupation that plays an important role in developing and diversifying the province’s economy. 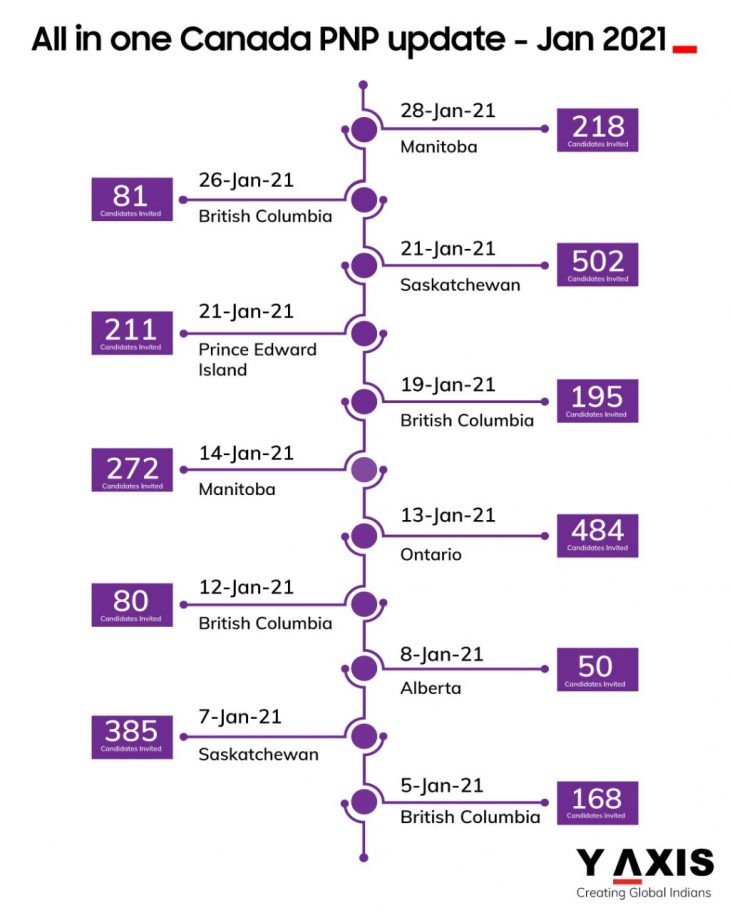 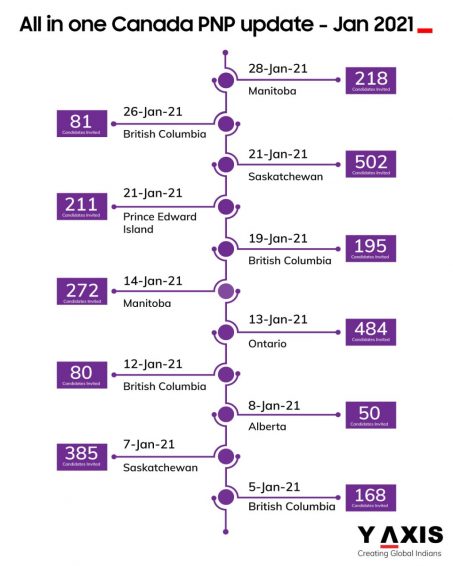 The year 2021 started with the challenges for Canada immigration, carried over from 2020. Canada planned its immigration strategies well and executed them with determination.

Canada kept holding the Express Entry and PNP draws at regular intervals and has been reducing the qualifying score requirement for new immigration candidates. The PGWP holders were granted an option to apply for another open work visa valid for 18 more months. This also gave employers in Canadian provinces and territories the chance to retain skilled foreign workers on PGWP without having to worry about their open work visa expiring.

Also, the PNP draws conducted in the provinces revealed a plethora of job opportunities, especially in key areas, for those willing to work in Canada. The performance of immigration at the provincial level has been highly contributory to achieving the high immigration level targets set by Canada for 2021-2023.

Let’s check out the major PNP draws that were conducted by Canada in January 2021.

MPNP issued 218 Letters of Advice to international graduates and skilled workers. The following was the distribution of invites among the Manitoba PNP streams:

BC PNP issued 81 invitations to skilled foreign workers in this Tech Pilot draw. The minimum score for candidates in all streams of British Columbia PNP was 80. The streams involved were:

PEI held this PNP draw, its first this in 2021, inviting 211 candidates belonging to the skilled worker and entrepreneur categories. The number of invites sent to candidates under each category was as follows:

Saskatchewan conducted an EOI draw in which candidates were incited from 2 immigration streams. The number of invites sent to each stream was as follows:

The minimum score requirement for each stream was 77 points.

In this draw, Nova Scotia targeted financial officers via the Labor Market Priorities stream which is linked to Express Entry. The candidates chosen were required to have a minimum of 4 years of experience under NOC 1114 (Other Financial Officers). These candidates also had to have CLB 9 or above in all abilities.

146 new candidates were invited via the French-Speaking Skilled Worker stream that’s linked with Express Entry. The candidates had CRS scores between 456 and 467. The qualified candidates had a minimum CLB 7 in French and CLB 6 in English.

NOIs were sent via the Express Entry Skilled Trades stream. The CRS scores required ranged from 434 to 460 points.

Alberta invited 50 new immigration candidates in a PNP draw with CRS scores as low as 406. Since June 17, 2020, this was the first Express Entry draw conducted by Alberta via AINP.

The candidates belonged to the following categories:

This was British Columbia’s first PNP draw of 2021. The categories from which candidates were selected are as follows: 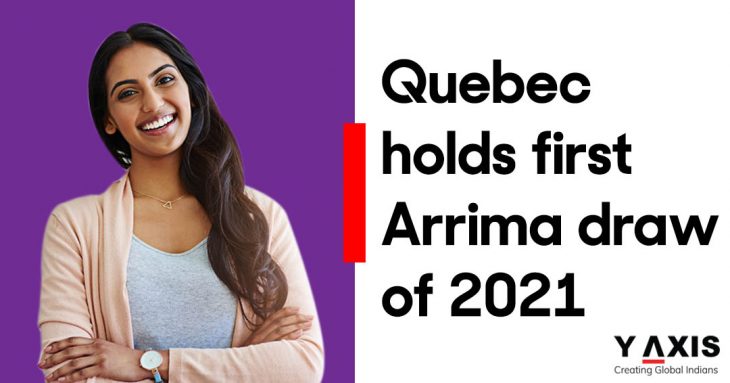 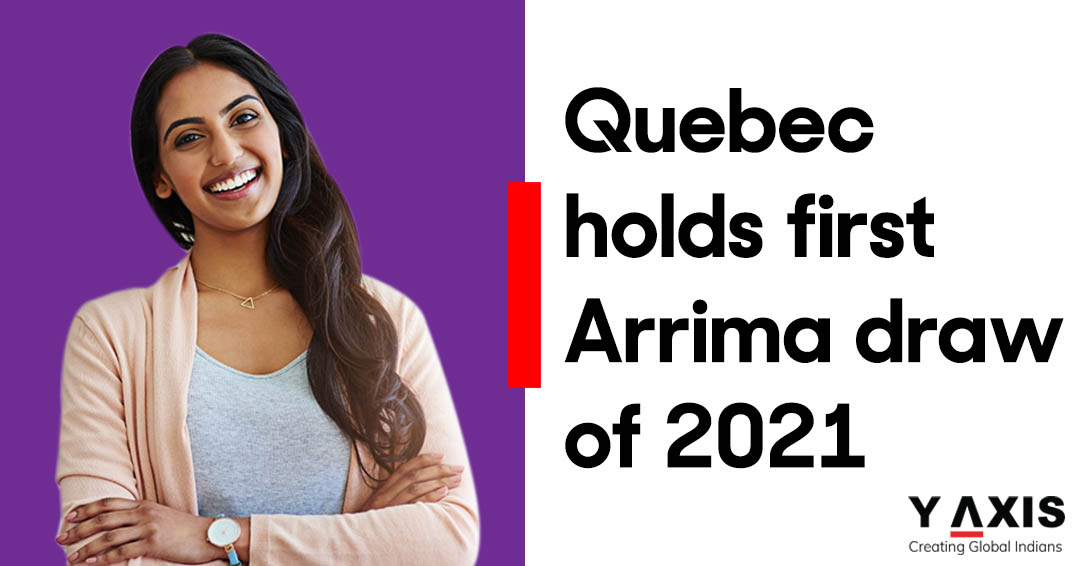 On January 26, 2021, Quebec issued invites to 95 immigration candidates to apply to be selected under the RSWP. The selected candidates had EOI in Arrima, Quebec’s online portal for registration.

The candidates invited to this draw belonged to 2 categories. In the first category, there were candidates who had a valid offer for employment. In the second category, there were candidates who were in Quebec already as a consular officer, a diplomat, or a UN representative if not a representative of an inter-governmental organization operating in Quebec. The people included in the draw could also be staff members of any such official body since these jobs are also included under Quebec Immigration Regulation’s Section 26.

Under the RSWP candidates must first file an EOI via Arrima. The submission is then reviewed by MIFI. Then invitations are sent to those who meet the criteria based on Quebec’s labor market needs.

Arrima, which was introduced in 2018, was created to manage the pool of applicants for RSWP. Its online application intake system simplifies the process that was based on a first-come, first-served criterion.

Candidates of at least 18 years of age must as the first step, create an EOI profile in Arrima. After this, they are placed in a candidate pool. Then the most qualified candidates are chosen based on criteria including those that are required specifically to meet the labor market requirements of Quebec. The chosen candidate will also have great potential to integrate into the native society in Quebec.

The invited candidates can apply for Canada PR within a limited time. In that time, the completed immigration application must be filed along with required fees paid and needed documents also submitted.

After this, the immigration ministry looks through the application and gives it a score with the use of the RSWP selection grid. The score is assigned based on factors like age, education level, work experience, and language skills.

Candidates who get a passing score on the selection grid will get a CSQ. This document certifies that a candidate has received approval for PR by the province. Those who hold the CSQ can apply for a Canada PR visa. All that remains then will be a medical check and a screening for criminal admissibility.